Sticking a spade into a grassy patch near a roundabout for the first time felt a little naughty.  I had a feeling a van would turn up at any minute and take me away.  Passers by were all encouraging of any attempt to make things better.  Many of them didn’t believe the willow fedge I was planting would last though – that drunk youths would rip them out of the ground.  I thought that was  a little unfair, given the sturdy nature of my planting, and the car treads churning up the grass suggested damage was being done by (adult?) drivers, and hopefully not drunk ones.

It took two hours to plant, but this isn’t a one off planting, or even a longer term gorilla garden (although I like the sound of that), but the start of a community group, with an interest in improving our own community, including a bit of planting.  The next day I had a knock on my door from a neighbour, who also happens to be an excellent sculptor.  He had created for our group, hewn from oak, a beautiful noticeboard to place on our corner.  A symbolic centre for our community to post things.  We’d also gone to a fair amount of effort to discuss with all the appropriate authorities, and had a public meeting, well attended by local residents and councillors, set up mail list, and prepared a constitution to be presented at the next meeting. 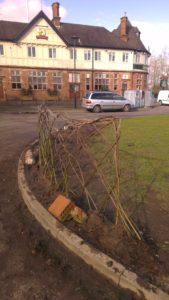 The main problem everyone is talking about is parking and traffic, which is as it should be, given the nature of the number of accidents and problems at the roundabout.  Finding the people and then starting conversations to begin bringing together everyone that cares about ‘Swan Corner’ takes a bit of work.  Getting agreement to the same (especially road) improvements can be an even longer, harder journey.

Maybe the trees will get ripped up, the noticeboard graffitied, but if we don’t try we’ll never know.  I want to work with my neighbours because they’re a nice bunch of people, and I want to put trust into young, old everyone who passes through our neighbourhood because they deserve it.

I want to be part of a strong community able to say what we want and to take responsibility for our own space…And plant some more trees.